Cardano Price Prediction: ADA Price Remains Pressured Below $1.20; Is $0.95 Next?

ADA price finds strong resistance near the $1.20 level as the price failed to move beyond the level for the past three-four sessions. 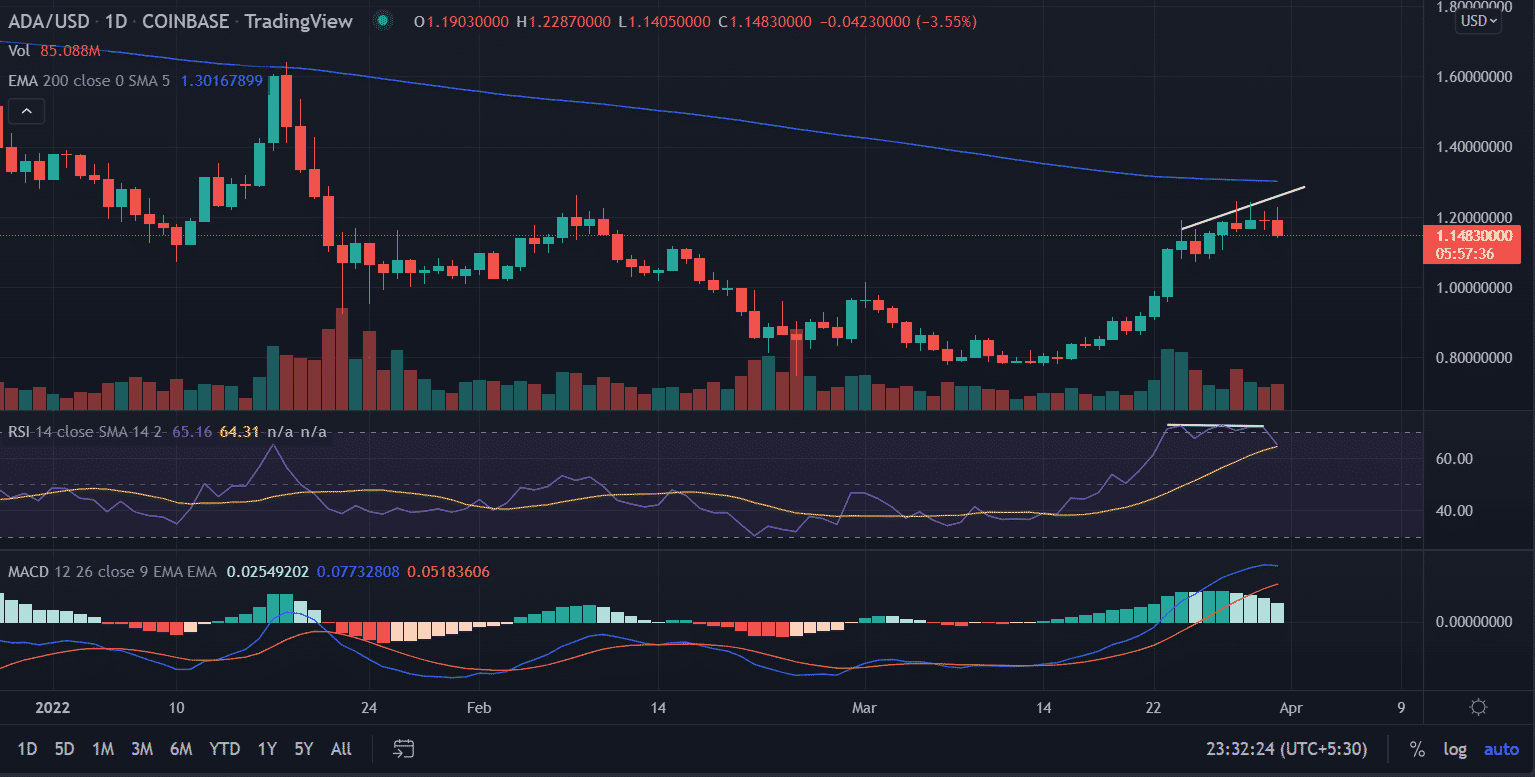 ADA price continues to trade sideways near the higher levels with minimal losses. The support-turned-resistance $1.15 remains a critical level to trade. Increased selling pressure could result in a pullback in the price in the short term at least.

If the price breaks below $1.15 on a daily closing basis then it could test the psychological $1.0 level. This would be a major setback for the bulls.

An extended sell off-could further exploit the lows of March 23 at $0.95.

On the flip side, a shift in the bullish sentiment and if the price is able to sustain the session’s lower level would make bulls hopeful. On moving higher, the first upside target could be found at $1.25.

Next, market participants would approach the critical 200-EMA (Exponential Moving Average) at $1.30.

A rise in volume with a decline in price is a bearish sign for the price.

RSI: The daily Relative Strength Index still trades above the average line. However, it retraced from the higher levels. The indicator shows negative divergence with the price that indicates an impending bearish momentum in the asset.

MACD: The Moving Average Convergence Divergence holds above the mid-line but with a receding bullish sentiment. A downtick in the oscillator would strengthen the negative outlook for the price.

The worldwide crypto market cap on 24 June stood at $937.07B, under the $1T mark. Nevertheless, there was a 3.11% enhance over the past day. However the probabilities...

The Ripple has been caught within the lengthy operating lawsuit filed by the U.S securities and alternate fee (SEC). Amid the rising hypothesis over the end result of...

The decentralized Ethereum scaling platform ticked off its first sustainability milestone by attaining carbon neutrality this week. By investing $400,000 in carbon credit, Polygon is now one step...

Cosmos (ATOM) Price Soars 12%, Is It About To Break Resistance?

The worth of $ATOM, the Cosmos blockchain’s native token, is up by about 12 % to $7.64. For the reason that huge announcement by crypto derivatives change, dydx,...

Enjin-s on – A 25% rally, investors’ balances, and whatnot

The recovering market has allowed many cryptocurrencies to go on an uptrend, one thing that has elated buyers significantly. Nonetheless, what have to be remembered is that the...

Bitcoin (BTC) Price Has Formed A Historical Bottom; Here's Why

Ethereum: This will give ‘more time for the Merge to stay live longer’